In U.S. collegiate sports, “The Elite Eight“, are the final eight teams in the national tournament; two from each region. The outcome of those four games becomes, “The Final Four”. However, for this summer time edition of The Elite Eight, we’re talking about the revered “eight glasses of plain water per day” health dictum.

While optimal hydration is essential for health, and water is considered the “gold standard” of hydration, we do not need 64 ounces of plain water a day. We do, however, need 64 ounces or 1.9 liters of total fluid obtained via drinks and food for optimal functioning and health, especially during the warm weather and exercise.

Furthermore, what makes the eight glasses of water per day advice “elite”/special is that consuming a zero calorie beverage might just be the antidote to the current epidemic of obesity and Type 2 diabetes. Americans typically satisfy their thirst with sugary beverages. Shockingly, these drinks contribute the majority of our daily ingestion of sugar! END_OF_DOCUMENT_TOKEN_TO_BE_REPLACED

“the degree to which an individual has the capacity to obtain, communicate, process and understand basic health information and services to make appropriate health decisions”.

Although considerable efforts have been made regarding the formulation and dissemination of health and self-care information, we are seeing little effect on health outcomes. All parameters of health and wellness in the U.S. remain stubbornly poor, including the high incidence of obesity, type 2 diabetes, heart disease, cancer, mental health, and addiction. Healthcare systems and healthcare professionals continue to tout patient engagement strategies and the importance of health literacy, but as Michael Friedman states in his excellent piece on the topic:

END_OF_DOCUMENT_TOKEN_TO_BE_REPLACED

The most recent data is that 20-40% of the U.S. adult population is sleep deprived: meaning they are not getting the recommended 7-8 hours of sleep per night. The consequences of inadequate sleep on both the individual and society as a whole, are significant. The worst of these include increased obesity, decreased attention and learning, increase in mood disorders, and an increase in accidents. Working against our desire for optimal sleep are our fast paced lives, inevitable work/life stressors, and 24/7 online media, entertainment, and socializing. Although these are formidable obstacles, we must make strides towards the holy grail of a “great night’s sleep” .
END_OF_DOCUMENT_TOKEN_TO_BE_REPLACED

“If we are what we do and what we eat, we’re potatoes: couched and fried.” – Ellen Goodman, Wall Street Journal

Fast Food has a rich and storied history. In Roman times, through the middle ages, fast food, sold by venders, was a necessity, as many dwellings had no kitchen.

The British “Fish ‘N Chips” was popularized in the mid-1800s by coastal towns that needed to service the large trawling industry. The undisputed King of the Fast Food Industry, however, is the United States. With the introduction of the automobile in the early 1900s, there was ever greater access to fast-cook restaurant fare. America fell in love with “White Castle” hamburgers; the rest is history. America has the largest fast food industry, and, has peppered the world’s landscape with Subway, McDonalds, Kentucky Fried Chicken, Burger King, Starbucks, Dunkin Donuts, Wendy’s among others, whose outlets can be found in over 100 countries.

Due to its worldwide dominance of the Fast Food Industry, U.S. citizens are particularly immersed in the fast food culture, and sadly have “drunk the cool-aid”. While this essay addresses the effects of fast food and other ultra-processed food in America, similar consequences are occurring around the globe.

END_OF_DOCUMENT_TOKEN_TO_BE_REPLACED

“Playing a game is the voluntary effort to overcome unnecessary obstacles.” (Bernard Suits)

Game-play focuses and controls our attention, taps into our innate strengths, thrills us utterly, and compels us to greater resilience in the attainment of more powerful and effective skills. For these reasons, some believe that game-play is an invaluable tool to employ in tackling the biggest problems in our world today.

The ability of gaming to focus human attention so completely has attracted all those who wish to harness just a piece of that attention for their own ends. Business, education, and healthcare have all used gamification with the hopes of affecting certain desired behaviors. The goals of gamification in healthcare would be no less than to effect personal and societal behavior change, to achieve improved individual health, and the health of populations.

In this paper, I will give some history and context to game play, video game design, and the gameful mindset to show how gamification in health and healthcare can and does happen successfully when done well. I will also include demonstrative examples and a large number of references for further perusal.

What is A Game

Games are a structured “form of play or sport, especially a competitive one played according to rules and decided by skill, strength, or luck.” –wikipedia

The history of gaming goes back to ancient times and game-play is one of the oldest forms of social interaction. In essence, the games we play are a celebration of our potential, our dreams, and our innermost passions. Game-play is self-revelatory, and, at the same time, takes us ‘out of ourselves’.

The vast variety of game forms, both ancient and modern, speaks to the centrality of games, and game-play in human life. We play games seated, across from each other, standing, poised ‘in combat’ at the 50 yard line in stadiums, and across the world, in online video games. We stand, jump, kick, run for both online and offline physical games. ‘Exergaming’, the combination of video gaming and exercise, has taken individual and group exercise to a new level. The brilliant ancient Chinese game of ‘Go’, a territorial board game of strategy, is played with as much passion today, as it was several centuries ago! 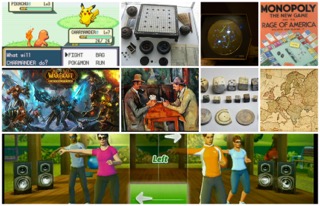 END_OF_DOCUMENT_TOKEN_TO_BE_REPLACED

Definition: to move at a regular and fairly slow pace by lifting and setting down each foot in turn, never having both feet off the ground at once.-

“What if a simple act could change the world?” – Born to Walk: The Transformative Power of the Pedestrian Life

The U.S. Surgeon General regularly announces public health campaigns, “Calls to Action”, which are deemed particularly important for the overall health of the nation. A “Call to Action” is defined as “a science-based document to stimulate action nationwide to solve a major public health problem”.

END_OF_DOCUMENT_TOKEN_TO_BE_REPLACED

“Pseudo-dangers represent further opportunities to avoid problems we do not wish to confront….” – Barry Glassner, The Culture of Fear

For a while now, I’ve been concerned about the increasing role that fear has played as a tactic in persuading patients to choose certain treatments in healthcare, and to adopt certain habits. Fear is also, often a dominant driver for patients in their health decision-making process.

Fear, however, is an unwanted distraction when making decisions. In contrast to a calm state of mind, it creates added anxiety and stress, in a citizenry already burdened with increasing stressors. How can adding to this be constructive, or further, even moral? How can healthcare decisions, made from fear, be in any way conducive to optimal health outcomes, or conducive to sustainable well-being throughout our lifespans?
END_OF_DOCUMENT_TOKEN_TO_BE_REPLACED

The Path to Wellness

‘Tis the season of celebration. As we are in a festive month, I’d like to talk about a few celebratory health related ‘fireside chats’ that we might consider when we gather with our families and friends this holiday season. Conversations around health and healthcare are often avoided as they can invite a difficult mixture of bad news, fear, criticism, advice, or unwanted cajoling. I’d like to flip these chats towards celebration by identifying four major things in life that are both good for us, and are, at essence, a cause for celebration.

For this post on holiday “fireside chats; a celebration of self-care”, I chose four major topics to delve into: emotional health, physical exercise, food and food culture and the circle of life. Included within are videos, text and references that I hope hone in on the essence of self care, and the process of creating healthy lives for ourselves, and our loved ones.

Let’s celebrate the role of self-care in the lives of ourselves, our families, and our friends!

END_OF_DOCUMENT_TOKEN_TO_BE_REPLACED

Excerpts from ‘Limitless’ The Movie (Trailer)

A tablet a day and I was limitless

A perfect version of ourselves…..power…..

What would you do???

Introduction: A pill for every ill.

From teenagers to granny, to the pro-athlete, and everyone in between, the United States is the most drugged nation in the world. A staggering:

‘We need to start talking about how our food supply is making many of us sick.”

“Sugar high” is the term used to describe the cascade of responses after eating a sugar load. A high sugar load, especially a pure sugar load, triggers is a rapid release of insulin to counteract the high blood sugar. With that response, glucose is absorbed into cells and the blood sugar plummets. We feel hunger with the low blood sugar and if we consume a sugary snack or meal, the cycle restarts. The taste of sugar is also ‘addictive’ over time. At this time we have a cultural sugar high, a palate tuned to the taste of sugar, across our nation and indeed the world. It has led to unprecedented levels of Type 2 diabetes and obesity. END_OF_DOCUMENT_TOKEN_TO_BE_REPLACED