“Pseudo-dangers represent further opportunities to avoid problems we do not wish to confront….” – Barry Glassner, The Culture of Fear

For a while now, I’ve been concerned about the increasing role that fear has played as a tactic in persuading patients to choose certain treatments in healthcare, and to adopt certain habits. Fear is also, often a dominant driver for patients in their health decision-making process.

Fear, however, is an unwanted distraction when making decisions. In contrast to a calm state of mind, it creates added anxiety and stress, in a citizenry already burdened with increasing stressors. How can adding to this be constructive, or further, even moral? How can healthcare decisions, made from fear, be in any way conducive to optimal health outcomes, or conducive to sustainable well-being throughout our lifespans?

Literature has shown that certain decisions made from a position of fear and anxiety are less optimal than those made in a state of calm. As described below, emotions such as fear, trigger actions, thus sacrificing cognitive processing for speed.

In some circumstances, this instantaneous triggering of flight by fear is life-saving. However, in situations where cognitive processing is desired, and needed, the presence of fear is counter-productive.

Physicians, and other healthcare professionals are seeing many patients who make decisions based on fear or dread rather than reason. This is not entirely the patient’s doing. Mixed messages, over-selling medical care, media hype, exaggerated presentation of medical literature, and an incomplete understanding of healthcare statistics are just some of the reasons why the public has an inaccurate view of risk and fear in health and healthcare.

Likewise, physicians are not immune to fear. Fear of disease, death, uncertainty, medical error, and lawsuits all drive dysfunctional behavior in this ordinarily rational group of professionals.

The schematic below, published by the Centers for Disease Control and Prevention, illustrates the domains that influence evidence-based decision-making. The environment and organizational context in which healthcare decisions ‘swim’ encompasses the entire process. Any overarching culture, including a culture of fear, will have effects in each domain.

Communication styles, environment, individual health literacy, and memory are just a few of the factors that play a role in our ability to digest and contextualize medical information. As much as 40-80% of medical information is immediately forgotten by patients. It is not known how much of this memory dysfunction is due to fear.

However, in this schematic of the pathology and recovery branches of the fear response, both avoidance and extinction, are distinctly counter productive to engagement in healthcare decision-making. 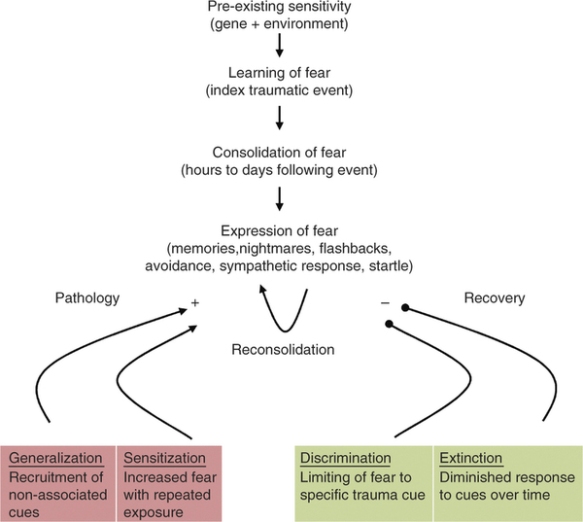 Role of Fear in Over-Diagnosis and Over-Treatment

Surrounded by an atmosphere of fear, the public makes unreasonable healthcare demands, and physicians over diagnose and over treat. Both are irrationally afraid of diseases and conditions out of proportion to the probability of occurrence, and afraid of uncertainty, error, and lawsuits.

Unfortunately, once this atmosphere of fear has been so successfully ‘sold’, it becomes extremely difficult to “walk the process’ back. The public may be left feeling that treatments are being ‘withheld’, rather than the reality that the treatments are not necessary. Anecdotal cases, and the tiny cancers which never would have caused death, are ‘cause celebres’ in a culture that values medical action over any other course of treatment (watchful waiting, end of life supportive care, lifestyle change etc).

I couldn’t help reflect on how that anxiety had been created. The medical system had done what it so often does: performed tests, unnecessarily, to reveal problems that aren’t quite problems to then be fixed, unnecessarily, at great expense and no little risk. Meanwhile, we avoid taking adequate care of the biggest problems that people face—problems like diabetes, high blood pressure, or any number of less technologically intensive conditions. An entire health-care system has been devoted to this game. Yet we’re finally seeing evidence that the system can change—even in the most expensive places for health care in the country. ♦ ~ “Overkill” Atul Gawande

A discussion of the role of fear in decisions around cancer including cancer screening and cancer treatments, is beyond the scope of this post. Suffice it to say that fear plays a tremendous role in decision making in the cancer realm. It is the responsibility of both the physician and patient to try to calm fear’s waters and provide a setting in which patients can make rational decisions that they will be happy with in the future. Tragically, a culture of fear envelopes all cancer decision making. It is hard to un-ring that bell. From How Should Doctors Share Impossible Decisions With Their Patients by Lisa Rosenbaum:

Take, for instance, the increasing rate of women with breast cancer pursuing prophylactic double mastectomy—most famously, Angelina Jolie. For most women with breast cancer, the risk of later developing breast cancer in the other breast is low, meaning the risks of mastectomy outweigh the benefits. Indeed, a recent survey of women who had undergone prophylactic mastectomy found that some seventy per cent would derive little survival benefit. Nevertheless, ninety per cent of those women reported that they were “very worried” about breast-cancer recurrence. In other words, in the setting of fear, the possibility of recurrence, rather than its actual probability, fuels decisions that, over all, likely cause more harm than good.

Dr. Rosenbaum also wrote a somewhat controversial opinion piece in the NY Times (controversial largely because of the headline) addressing early stage breast cancer treatment in women. In personal correspondence to me, she stated that she wanted to make sure that women were not stigmatized for responding to their fears and requesting full treatment for “Stage Zero” breast cancer called D.C.I.S. (ductal carcinoma in situ) despite incomplete data on “Stage Zero”.

Dr Atul Gawande also addressed this in “Overkill’ when he spoke about surgically treating a patient with a tiny thyroid nodule who was too afraid to live with that nodule.

“I took her thyroid out because the idea of tracking a cancer over time filled her with dread, as it does many people. A decade from now, that may change. The idea that we are overdiagnosing and overtreating many diseases, including cancer, will surely become less contentious. That will make it easier to calm people’s worries. But the worries cannot be dismissed. Right now, even doctors are still coming to terms with the evidence.”

The last statement regarding physicians and their fears, beliefs, and culture, speaks directly to the plea made by H. Gilbert Welch and Peter Albertsen; not to blame the physicians for giving in to their fears, and those of their patients. We are in unusual times, where there is more uncertainty, yet we are all uncomfortable with accepting that. Hopefully in time, with more data, and more conversation about the uncertainty of life, and our health in general, we will experience increased calm and less worry.

There are a multitude of physical manifestations, and ramifications, of stress on our bodies. Most are not positive.

Appropriate Use of Fear

Of course, we are very thankful for the fear response, which can be life-saving.

There are also situations when fear is useful as a complementary strategy to employ in healthcare decision-making. Two cases come to mind; tobacco cessation and childhood vaccinations. However, even in these cases, it is still important to take the time to have conversations, and to make well-crafted arguments, using clear patient decision-making tools.

Combating Fear Via The Scientific Method

Reasoning can go a long way to calming fears. The issue is that critical thinking, questioning, and the scientific method are not universally taught or learned. The result is that rumors, quack science, conspiracy theories and fads spread like wild fire, especially in today’s 24/7 online, social media laden, world.

An excellent article recommends an emphasis on teaching of scientific method, not scientific facts, to “combat the demon-haunted world”.

See: Pseudoscience and Conspiracy Are Not Victimless Crimes Against Science 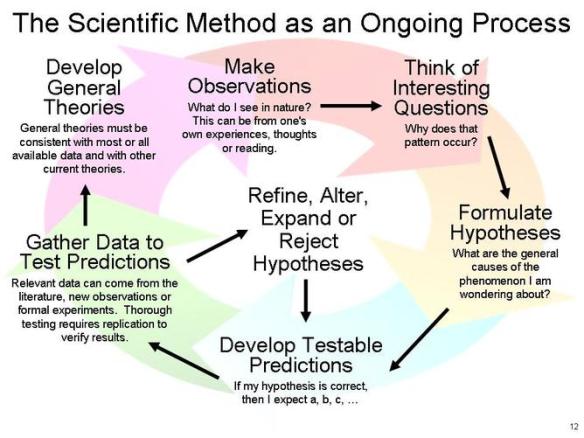 The coupling of fear and our health has created a monster of sorts. People alternate between avoiding health-related issues until the last possible moment, and when that is not longer tenable, deciding from a position of irrational fear. It is the worst of both possibilities; avoidance on the one hand, and over-reaction or paralysis on the other. Avoidance and over reaction are precisely the opposite responses that are most conducive to a sustainable healthy life. Preferably, people would choose to be attentive and excited about personal health and health goals on an ongoing basis. Then, when medical decision-making is necessary, approach those moments with calm and reason.

Additionally, the energy expended when dealing with fear and anxiety is energy unavailable for thinking about our health and accomplishing health goals. Essentially, all the available oxygen in the room is used up; the fear becomes the issue, a major distraction.

For a multitude of reasons, it is time to decouple messages of fear and health, and for ourselves, as individuals, to understand the origin of our fears more fully.

The Complexity of Fear https://www.psychologytoday.com/blog/intense-emotions-and-strong-feelings/201112/the-complexity-fear

How Stress Damages Your Mind and Body http://artemvitale.com/2015/09/how-stress-damages-your-mind-and-body/

Role of Fear In Over-treatment, Over-diagnosis, cancer screening and treatment

How should doctors share impossible decisions with their patients http://www.newyorker.com/tech/elements/how-should-doctors-share-impossible-decisions-with-their-patients

Why doctors shouldn’t be punished for giving prostate tests http://www.nytimes.com/2016/01/07/opinion/why-doctors-shouldnt-be-punished-for-giving-prostate-tests.html?ref=opinion&_r=0

Ethical considerations on the use of fear in public health campaigns http://www.clinicalcorrelations.org/?p=4998

Fear As A Motivator: Does It Work vs A Positive Outcome Focus? http://www.mattmcwilliams.com/fear-as-a-motivator/

The Scientific Method VS Fear

Pseudoscience and Conspiracy Are Not Victimless Crimes Against Science https://theconversation.com/pseudoscience-and-conspiracy-theory-are-not-victimless-crimes-against-science-42630

The Danger of Science Denial https://www.ted.com/talks/michael_specter_the_danger_of_science_denial?language=en

Glassner, Barry. The Culture of Fear: Why Americans Are Afraid of the Wrong Things. New York, NY: Perseus, 1999. Print.

Gardner, Dan. The Science of Fear: How the Culture of Fear Manipulates Your Brain. New York, NY: Plume, 2009. Print.

2 thoughts on “Time to Decouple Fear and Health”